October is the month for Rhubarb

When To Plant Rhubarb
Rhubarb can be grown either from seed or as plants purchased from your garden centre. The problem with rhubarb grown from seed is that it takes a year longer to produce stalks and even then, the plants are not guaranteed to be true to type. It's a gamble which takes three years before you know if you have succeeded or failed. For this reason, we do not recommend the 'seed' route.

Rhubarb plants are available all year round at some garden centres, although by far the best time to plant rhubarb is late autumn to early winter, December is a good month.

How  To Plant Rhubarb
Rhubarb is normally sold in garden centres as one year old plants (known as 'crowns') of a particular variety. Rhubarb five years or more old can be lifted and split into three or more 'crowns' - see the later section  on 'how to divide rhubarb'. Both types should be planted in the same manner.

Prepare the soil as described previously, and dig a hole a little bit wider than the plant. The depth should be such that the top of the plant is 2.5cm (1in) below the soil surface (see the diagram on the left). Fill in around the plant with soil, gently firming it down to ensure no air pockets remain. Water well if the conditions are dry. Spread a mulch (garden compost or other well-rotted organic material) around the plants, but not directly above where the crown will emerge in a month or so.

Care of Rhubarb
Rhubarb require very little care, but if you give them that care they will produce much finer stalks than neglected plants.

Every year after the leaves have died down, spread a new layer of garden compost or other well-rotted organic material around (but not touching the plants. This will conserve water and prevent weeds. In dry periods (normally only summer) give the plants a good watering, although this should only be required occasionally. In February, sprinkle a handful of general fertiliser (Growmore is fine) around the plants. Remove any weeds as they appear. 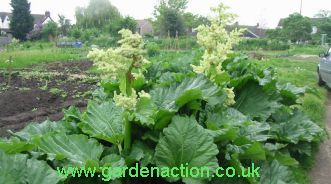 The seeds are the yellow 'flower heads' at the top.
Click picture to enlarge

The only other attention required is to cut off flower heads which may appear in early spring as the new rhubarb stalks emerge. Do this as soon as possible - if the flower head is left to grow and set seed, the plant will never fully recover to good strength. See the picture above.Forced rhubarb is delicious, the stems are more tender, sweeter and don't need to be peeled. It's a simple process and well worth trying.


Originating from Siberia, rhubarb is very strong and suffers from few diseases or pests. The only problem will be Crown rot. The top of the plant rots badly and it can be knocked of with ease. There is no cure, dig up the infected plant and burn it.


We recommend Cawood Delight - the stalks are long and scarlet with a great taste. A second choice is Victoria which is the best variety to choose if you want to grow from seed. 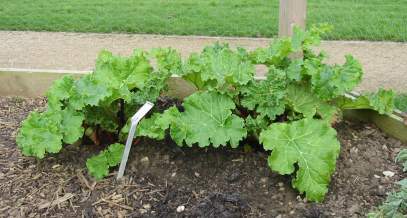 During the second season, pull only a few stems, ensuring that you only pull two per plant at any one time and that five healthy stems always remain. In subsequent years pull three or four stems at a time always leaving three or four - the cropping season is May to July or August, and you should get two or three chances during this time. Select the largest stalks, waiting for the leaves to fully open before the Stalks are taken by gently pulling the stalk as low as possible to the base of the plant and at the same time twisting. The leaves can go on the compost heap,  definitely don't eat them because they are poisonous.

All you need is a container (dustbin, box, large pot, bucket etc.) which will exclude light. Place it over the rhubarb as soon as it begins to show signs of growth. The lack of light and the heating effect of the container will rapidly bring on the rhubarb which should be ready for eating in about four weeks, a good month or so before rhubarb that is not forced. When the rhubarb is picked (or it outgrows the covering) remove the covering and leave the rhubarb to recover for next year. Have a go, it's really simple and worthwhile.